They can be traced back to ancient 4th or 5th century Rome when the yolks of boiled eggs were mashed and seasoned with spicy sauces and served as the first course to wealthy diners.

A traditional recipe called for the yolks to be blended with olive oil, wine or broth and served with pepper and silphium or laserwort, which is an extinct seasoning plant. Another recipe called for eggs to be garnished with pine nuts, lovage, pepper, vinegar, and honey.

By the 13th century, stuffed eggs were recorded in a period cookbook in Andalusia. The mashed yolks were blended with cilantro, onion juice, coriander, pepper, a fermented fish sauce, oil, and salt. After two, hollowed egg whites were stuffed with the mixture, the two halves were fastened together with a small stick.

By the 15th century, stuffed eggs were popular across much of Europe. There were recipes made with fillings of raisins, cheese, and herbs. Sometimes they were topped with a sauce of cinnamon, ginger, and cloves blended with the juice of unripe fruits.

The term “deviled,” as used in reference to food, came about in the 18th century, with the first mention appearing in print in 1786. By the 19th century, it was used to describe spicy food, including deviled eggs. It is assumed that the word symbolized the heat from fire associated with the devil.

It wasn’t until the mid-19th century that stuffed eggs appeared in cookbooks in the United States. Instead of the term “deviled eggs,” the popular hors-d’oeuvres were often given names like “mimosa eggs,” “dressed eggs,” “Russian eggs,” “angel eggs” or “salad eggs,” to avoid association with the wicked devil.

A recipe in Fannie Farmer’s 1896 edition of “Boston Cooking-School Cookbook” calls for the use of mayonnaise as a binder in the filling, but that style of stuffed eggs did not become popular until the 1940s.

Today’s classic deviled eggs recipe usually includes mayonnaise, mustard and paprika, but there are many modern variations that include, relish, dill, bacon, sriracha, wasabi or caviar.

Deviled eggs are served cold as an appetizer or side dish. They are so popular in the United States that many cooks have special serving trays made specifically for deviled eggs. The trays have indentations for the eggs, which keeps them from rolling around and sliding off the plate.

Everyone seems to have their own version of deviled eggs. For years, I used the recipe handed down from my mother. The filling was slightly tart with the addition of vinegar. It was salty and a bit dry.

I recently tried this new recipe and I like it better than the one my mother gave me. Remember, for best tasting results, start with local farm eggs. 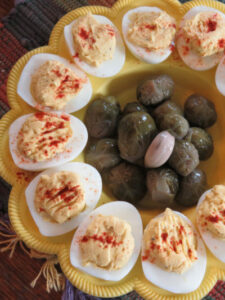 • 6 eggs, hard-boiled and sliced in half

• A splash of hot sauce

• Salt and pepper to taste

• Place cooked egg yolks in a small bowl and mash them with a fork. Stir in 2 tablespoons mayonnaise, mustard, Worcestershire sauce, hot sauce, salt and pepper. (You may have to add more mayonnaise, depending upon the size of the eggs.)

• Scoop the filling into the hollowed egg whites. Sprinkle with paprika.