Last week I wrote about fregola which is a toasted semolina pasta that looks a lot like Israeli couscous. I decided to cook extra fregola while making the Pesto Pasta and Pea recipe, so I could try the recipe on the back of the package.

We have all probably tasted a tuna pasta salad at some point. There are even tuna pasta kits available with pre-measured ingredients. Most of the tuna pasta salads I’ve eaten were good, but I wanted to try the new recipe, since fregola has a unique texture and nutty flavor.

Canned tuna is something I always have on hand because it can be used in many ways to make a quick meal.

Canned tuna is a relatively modern product. In the late 1800s, sardines were the primary fish that people ate from a can. By the early 1900s sardines had been over-fished and ocean conditions were poor due to weather changes.

Albert Halfhil, a San Pedro Bay canner, had empty sardine tins, so he decided to pack them with locally caught albacore tuna. People loved it! It was cheap, and it could be substituted in recipes that called for chicken or canned salmon. Halfhil sold 700 cases of canned tuna his first year, and, by 1914, he was selling 400,000 cases a year.

With the onset of World War I, the demand for canned tuna soared, because it was a food that soldiers could take into the field. Returning soldiers continued to eat canned tuna. By 1940, tuna had displaced salmon as America’s favorite fish. The demand was so high that fishermen began fishing for other species of tuna just to keep up. The United States soon became the world’s biggest producer and consumer of canned tuna.

The tuna industry took a dive during the 1980s over health concerns and dolphin bycatch. Canned tuna was said to contain unsafe levels of mercury. The other problem was that catching tuna harmed dolphins and sharks. This lead to USDA promoted “dolphin-friendly” tuna.

Today, tuna is sold in cans and pouches. It is the second most consumed seafood in the United States…right behind shrimp. Tuna is high in protein and low in fat, but, above all, it is convenient.

This quick fregola and tuna salad recipe is sure to hit the spot on a hot summer day. 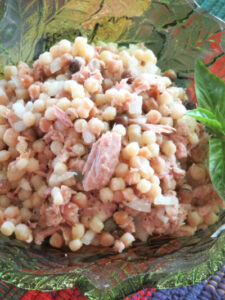 • Cook pasta according to instructions. Drain.