Kale Chips, How I Love Thee

Hello out there, Wild Rampians!  (I don’t know that we have a name for those of us who patronize the Wild Ramp, but Rampians has a very regal tone to it, so I think we’ll go with it for now.) Today is my first blog post with the Ramp, and I’m excited to talk local food, culture, and recipes. The Ramp is brimming with all kinds of goodies right now.  The end-of-the-summer harvest is taking place, and all the while, some of the fall squashes are starting to appear.  I spotted acorn and butternut squashes with my own peepers at the Ramp last week.  But let’s not rush the season yet — one thing at a time.  We still have the last gasps of summer to hang onto here in August, even if the kids have gone back to school and this summer has been one of the coolest in recent memory.  (Perfect for those of who enjoy outdoor activities—- except maybe going swimming anytime before early afternoon– brr!) Right now, there are tomatoes aplenty, watermelons, and KALE!  The kale is so pretty.

I think of kale as the Kate Middleton of the vegetable world.  Once an ordinary vegetable— but has in recent years been elevated to royal status because of its good looks, versatility, and loveability.  Everyone likes it if you give it half a chance.  If you don’t want to give it half a chance, well, I’m sorry.  That’s your loss. Let me start out by saying that when I first heard the phrase, “kale chips,” a small shiver of disgust went through my body.  It did not sound appetizing to me.  Maybe it was because I had once purchased those vegetable chips that are the texture of Funyuns at the store (just say no).  I think then I had decided that making chips out of vegetables — if that’s even what that was — was not for me. Maybe it was because I just couldn’t fathom how all these picky eaters that I knew were putting down their beloved salt and vinegar potato chips in favor of kale chips.  Something has to be weird about it.  I didn’t trust it. Finally, having never used kale in any of my own recipes, looked up a recipe for kale chips one day.  Seemed simple enough.  There are minor variations in the temperature, the time, and the measurements, but the recipe is pretty simple.

If you’ve never had them, they don’t taste anything like potato chips.  And if you’ve ever bought them from a health f00d store or somewhere similar, I implore you to give homemade kale chips a chance.  They taste nothing like anything you can buy in a store. But I know there are lots of recipes out there for different variations on the kale chip. 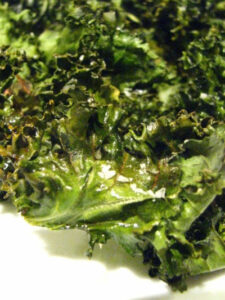 Heat your oven to 250 degrees Fahrenheit and spray your baking sheet with olive oil (It works best if you have a mister or some contraption for spritzing your olive oil, but you can get by without one.  Your chips will just be a little oily if you spread the oil unevenly).

Tear apart the kale, leaving the stalk.  The stalk does not make for a tasty chip.

Once you have everything arranged on your baking sheet, spray the actual kale itself with olive oil.  You want to go lightly with the oil, but you also need enough to make the sea salt stick. The amount of sea salt is critical and really takes some experimentation with your own tastes.  You probably want to get a bit of salt on each chip so you will have a salty taste in each bite. Once you have appropriately salted the kale, pop it in your preheated oven at 250 for 12-14 minutes.  You don’t want them to turn brown, but you do want them to get right to edge before they start turning.