There was an old sour cherry tree in my yard when I moved here. There were so many cherries that I invested in a cherry stoner. I froze cherries. I made pies and jam. One day, the old cherry tree blew over. For years, I have been without fresh sour cherries.

A few years ago, I invested in three small cherry shrubs recommended by Kim Jackson at Kim’s Greenhouse in Milton. Dwarf cherry shrubs are a recent development. They were first introduced in 1999, followed by the introduction of several cultivars in 2004. The shrubs produce sour cherries that can be used for cooking and processing. The best feature is you don’t have to climb a ladder to pick cherries.

This year, my shrubs were filled with blossoms and I was hoping for a nice harvest, but the blossoms were zapped by a late freeze. There were a few cherries, but, with the first tinge of red, birds swooped in and ate them.

I do have a lot of blueberries, but I am not crazy about blueberry pie. What if I combined fresh blueberries with a can of tart cherries for a pie filling? It would still have that tart cherry flavor and I could use up some of my blueberries. I put aside some time to experiment.

I like to make pies and I think I make good pies. I’ve entered pie contests and even represented Cabell County in the statewide pie contest at the West Virginia State Fair one year. In a survey conducted by the American Pie Council, one in four women believe they make the best pie, even better than Mom or Grandma. I am one of those women.

My standard crust is the one in an old Betty Crocker cookbook that a friend gave me as a wedding present. It uses Crisco. It is light and flaky and turns a light golden color without burning.

Pie has become a part of American culture, and, today, it is considered to be America’s most traditional dessert. Forty-seven percent of Americans said the word “comforting” comes to mind when they think of pie. Ninety percent of Americans agree that a slice of pie represents one of the simple pleasures in life.

What would be better on the Fourth of July than a cherry blueberry pie? Add a scoop of vanilla ice cream for a red, white and blue theme. It’s time to celebrate! 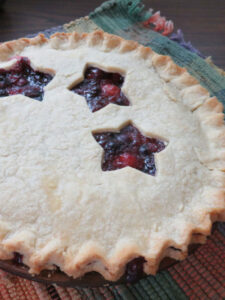 • Combine sugar, cornstarch, cinnamon, and undrained cherries in a saucepan. Heat over medium heat until mixture begins to thicken. Remove from heat and allow to cool.

• Meanwhile, make your favorite double-crust pie dough recipe for a 9-inch pie. Line the bottom of the pan with one crust.

Bake for 45 to 55 minutes or until crust is slightly brown and filling is bubbly.

• Cool pie for 2 hours before serving.