This is the time of year when I want to make room in my freezer for newly harvested fruits and vegetables. I took out a bag of frozen pesto from last year, but then I found myself challenged on how to use it.

I decided to try a new pasta recipe. The original called for orzo or rosamarina (rice-shaped pasta), but I had some fregola on hand and I decided it would be the perfect pasta to use in this dish. The small balls of toasted semolina dough paired nicely with the frozen peas and pesto. I liked the texture and taste.

Pesto can have a very bold flavor, so I usually add it sparingly until I get the intensity I like. Although the origin of pesto is unknown, its roots can be traced to ancient Roman times, descending from a green sauce called moretum made of herbs, garlic and cheese.

By the Middle Ages, a paste called ‘agliata’, made of stale bread, crushed walnuts, parsley, olive oil, hot pepper flakes, and garlic was an important food for seafarers who believed it warded off illnesses on long voyages.

By the 1800s, pasta al pesto was considered a working-class dish. That was the time pesto recipes began to appear. One of the earliest recipes resembles the one I use today, although the technique is different. I can easily grind the ingredients in a food processor, while the original recipe calls for using a mortar and pestle. My favorite pesto is made with basil, garlic, pine nuts, salt, olive oil, and Parmigiano Reggiano cheese.

After World War II, foreign companies began exporting pesto to the United States. Recipes for making pesto at home appeared in newspapers, but pesto did not become popular in modern cooking until the 1980s. It is most commonly made with basil, but I’ve seen recipes for pestos made of cilantro, arugula, mint, and watercress. Due to the expense, walnuts are often substituted for pine nuts.

Pesto is delicious served over pasta. It was a nice addition to the pasta and pea combination in this week’s recipe. Fregola looks a lot like Israeli couscous that has been toasted. It adds a complex nutty flavor to the dish.

It may be difficult to find fregola around here, and, when it is available, it can be quite expensive costing nearly $10 for a one-pound bag. Don’t let that deter you from trying this recipe. Orzo or any other small pasta can be substituted for the fregola. 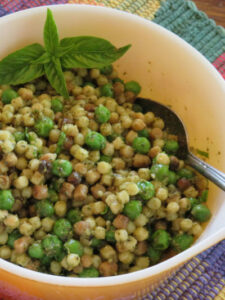 • Salt and pepper to taste

• Drain pasta and peas. Place in serving dish. Add pesto and toss gently to coat. Sprinkle with salt and pepper.

• Garnish with shredded Parmesan cheese and fresh basil, if desired.