Last year’s garden produced gallons of peppers until the first killing frost. I stuffed and froze peppers for quick winter meals. I froze strips of peppers for stir-fry and chopped peppers for omelets and casseroles. I dried cayenne peppers.

I perfected the art of roasting peppers, so I froze bags of those, too. I recently thawed a package of roasted peppers and made soup that was so good, I made it a second time the following week.

Roasting peppers is easy. Preheat the oven to 500 degrees. Place whole red peppers on a sheet pan and place in the oven for approximately 30 minutes, until the skins are wrinkled and charred, turning several times during roasting.

Remove the pan from the oven and immediately cover it tightly with aluminum foil. Set aside to steam for about 30 minutes. The peppers will be cool enough to handle and the skins will slide off. Remove stems and seeds and discard. The peppers are then ready to use in recipes, or they can be frozen.

Although pepper soup may seem like a winter meal, it provided a quick and delicious lunch on a rainy summer day. The peppers, combined with homegrown onions, garlic, and basil that I dried last year, made a slightly sweet and tangy soup. It was quite satisfying served alone, but it would be a perfect soup to serve with a sandwich, salad, or crackers and cheese.

I am glad that I thought to preserve last year’s harvest for later use because this year is not going to be a good year for peppers due to the amount of rain we’ve experienced. All of the plants are ragged with few blossoms. As a longtime gardener, I know that crops can be cyclical, depending on the weather.

Hopefully, by August or September, I will have some peppers to preserve so I can make this soup again on a cold winter day. 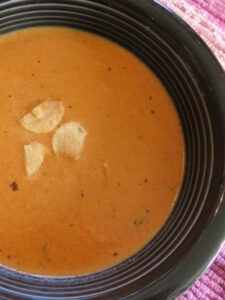 In a saucepan, sauté onion in butter for 2 to 3 minutes. Add garlic and cook 1 minute longer. Stir in red peppers, broth, basil, and salt. Reduce heat. Cover and simmer for about 20 minutes. Cool slightly.

Process soup in batches in a blender until smooth. Remove 1 cup to a small bowl and stir in half-and-half. Return remaining puree to pan. Stir in cream mixture. Heat through, but do not boil.