Presidents often say things that make some people upset. President George Bush got broccoli growers steamed when he said he didn’t like broccoli as a kid, because his mother forced him to eat it. He declared, as President of the United States, he wasn’t going to eat it anymore.

President Bush’s mother probably prepared broccoli the way my mother made it. She overcooked it until it turned to mush. Broccoli should be cooked until it is tender-crisp. Steaming or microwaving are the best ways to ensure it maintains its nutritional qualities.

Broccoli is an amazing superfood. It is packed with vitamins, minerals and phytonutrients and it is very low in calories.

Broccoli has been considered an important food by Italians since the Roman Empire. Thomas Jefferson experimented with growing broccoli, but it did not become popular in the United States until Italian immigrants introduced it in the early 1920s. Today, broccoli is one of the country’s most consumed vegetables.

The time for purchasing locally-grown broccoli is coming to an end. Broccoli is a cold weather crop. It grows best when soil temperatures are cool. It bolts and goes to flower when the soil gets too hot. A good way to say farewell to the season is to prepare a broccoli salad.

There are a number of broccoli salad recipes and most call for using tiny raw florets. I like raw cruciferous salads but I prefer to lightly steam broccoli to take away some of the hard crunch.

I use as much of the broccoli as possible, removing only the toughest part of the stem. I steam the bite-size pieces of broccoli until they begin to turn bright green. I then plunge them into ice water to stop the cooking. The broccoli is drained well before putting it into a salad.

This broccoli salad is easy to prepare. It makes a delicious side dish and is especially good with meals where you’d normally serve coleslaw. It is a colorful, creamy, crunchy, not too sweet, delicious and fresh-tasting crowd pleaser. The recipe gives a new twist to broccoli…one that might make President Bush change his mind.

If you’ve missed an opportunity to purchase broccoli at the farmers’ market, don’t despair. Many farmers plant a late summer crop for a fall harvest. 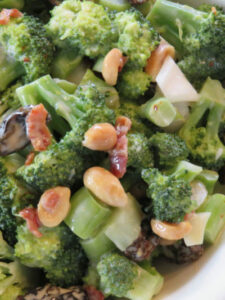 Fry bacon. Crumble and set aside.

Put broccoli, onion, raisins, and peanuts in a bowl. Add dressing and stir well. Refrigerate for 2 to 4 hours. Stir in bacon pieces just before serving.