Farmers markets are often defined as places where local farmers can sell their agricultural products directly to consumers. But, like the term “farm-to-table,” the term “farmers market” has become so pervasive that its integrity has been compromised.

Individuals must become discerning customers. It is important to know one’s market and the farmers who sell there. Some West Virginia farmers markets, like Putnam Farmers Market and The Wild Ramp, have established the distance that comprises their definition of “local” and they have clear rules and regulations about the products that are sold at their markets.

The Putnam Farmers Market is called a “Producer Only” market, which means items that are sold must be produced by the seller, with a few exceptions. Farmers may sell additional regional products that are not available in the area, but they must have permission from the market manager to do so.

Customers have an opportunity to speak directly to the producers at The Putnam Farmers Market. They can ask questions about the way fruits and vegetables are grown. Were they grown organically? When were the items harvested? Where is the farm located? Are the fields ever flooded?

Some local markets do not have such strict regulations. They allow “pinhooking.” The term refers to the practice of buying something cheaply with the expectation of selling it at a profit. There is no assurance that the items are local.

Customers may be purchasing tomatoes grown in Mexico or California at higher prices than they’d find for the same produce at the local grocery store. It is a shame that customers may be deceived, thinking they are buying local. Such practices also mean local farmers are competing against resellers and brokers.

There is no West Virginia state law regulating what can be sold at a farmers market. The rules are established by the market. It would be great if there was a distinction between a farmers market that sells items exclusively produced on one’s farm, and a “produce market” that allows vendors to buy wholesale produce for resale.

Until such regulations are put in place, it is the responsibility of the customer to learn what can be grown locally. It is important to know the seasonality of certain items. Customers have been known to be disappointed because farmers do not have tomatoes, corn, and watermelon in May.

Be wary of pop-up markets that have boxes of out-of-season produce with the logos from other farms. Inspect the quality. Items are often blemished, because they were picked days or weeks in advance. They may have been purchased at auction and are less than first quality. They may have been tossed during transport and may not have been kept under optimal conditions which will decrease shelf life.

A local farmer will usually harvest the evening before or morning of the farmers’ market to assure the customer is getting the highest quality.

Support your local farmers. You’ll find their farm fresh products are picked at the peak of ripeness, are more nutritious, and taste better than produce shipped from thousands of miles away. You’ll be supporting family farms and the local economy. 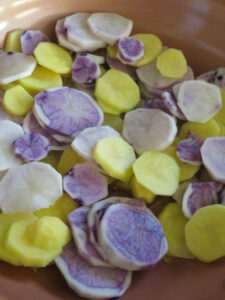 (Locally-grown potatoes are often better than conventionally-grown store-bought potatoes, especially if they have been grown organically. As a root vegetable, potatoes absorb pesticides, herbicides, fungicides, and insecticides that are sprayed above the ground that eventually migrate through the soil. Often, after being dug up, commercial growers will spray the potatoes again to prevent sprouting.)

In a large skillet, melt butter. (You may have to add additional butter during cooking to prevent sticking.) Layer potatoes in skillet. Sprinkle with salt, pepper and minced garlic. Cook, covered, over medium heat for about 10 minutes. Add onions. Cook, uncovered for an additional 10 to 15 minutes more or until potatoes are tender and browned. Turn frequently while cooking. Remove from heat and garnish with chopped parsley.

*Don’t be afraid to try heirloom blue, purple and red potatoes to add some color and variety to your meals